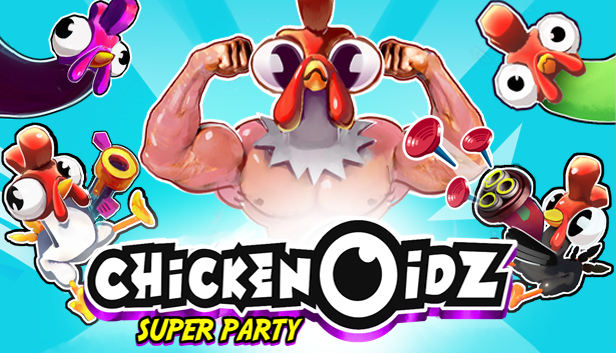 Chickenoidz Super Party – Multiplayer shooter for 1 to 4 players. You can play offline or online. Take advantage of a variety of arsenals and special features. Destroy the enemies and shatter the map. Become the winner of the Chicken PvP battle!

Chickenoidz Super Party is an action game where you can take your 4 friends with you and have fun. Although the game, developed and published by RaveGameDev, has not made much noise yet, it seems to be an extremely popular game in the future. The game has interface, voiceover, and subtitle support in many languages. It seems like a big project is coming in the global sense. Unlike most other games, the game has support for Windows, Mac, Linux, and SteamOS. So you can play the game on almost any device.

You will reach the pinnacle of fun in this game. In a game similar to Pummel Party, you will try to win by fighting together with your friends. You can have unique experiences in each game on many game modes and different maps. Watch out for chickens jumping from right to left, they can drop a bomb on your head!

What is that over there, a mutated chicken? When you get the DNA mutation, you turn into a giant “muscular” chicken. In this way, you can more easily crush the heads of other small chickens.

Stun with a hammer, punch with a boxing glove, move with a pocket teleport. These are just some of the features available in the game. Surprise your opponent and don’t fool yourself!

You can visit Steam page of the game to add to your wishlist.

Chickenoidz Super Party is a playable game but there are so many games similar to this concept.
But the unique game modes and game design seem enough to entertain.